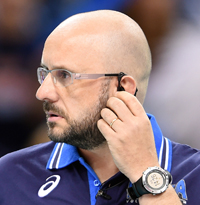 Mauro Berruto, current CEO of the Scuola Holden – Storytelling & Performing Arts in Turin , was the Head Coach of the Italian Men’s Volleyball National Team from 2010 to 2015. He graduated in Philosophy at the University of Turin (with an anthropological field research in Madagascar).
After ten years as Head Coach in A1 division (in Italy and Greece), he becomes (from 2005 to 2010) Head Coach of the Finnish Men’s National Team (historical 4th place at the European Championship 2007). Leading the Italian team from 2010, he wins six consecutive medals in major international tournaments, including the bronze medal at the Olympic Games in London 2012. Appreciated keynote speaker is also expert of human performance and author of two novels including recent “Independiente Sporting” (Baldini & Castoldi), that became also a theatrical performance entitled “Sporting”.