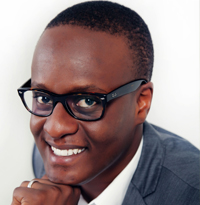 Eric was born and raised in Kenya, with a Kenyan mother and a Ugandan father he considers himself an East African. He is the Founder and CEO of KadAfrica, a commercial passion fruit farm and out grower network. KadAfrica works with more than 1600 out of school girls aged 16-22 in western Uganda to build sustainable livelihood options by starting viable agro-enterprises cultivating passion fruit. He “passionately” believes that involving youth in agriculture is key to developing Uganda and the region. Eric completed a Bachelor of Arts degree in International Relations from Monash University in South Africa in 2008.
Prior to KadAfrica, Eric worked in marketing for four years, representing clients such as Air Uganda, Shoprite Supermarkets, British High Commission, Sadolin, and Stanbic Bank.
In late 2012, he moved to Fort Portal, Uganda where he founded KadAfrica. Eric cannot imagine ever going back to work in advertising, and instead employs his marketing skills to the sale of passion fruit.
Eric has secured contracts with Sheraton Hotels, Uchumi and Nakumatt Supermarkets, and most recently an export deal to the United Kingdom where you can now taste KadAfrica passion fruit in supermarkets in London. Eric is Africa’s youngest ever winner of the Yara Prize for his transformative work towards a Green Revolution Africa. He is a 2015 Acumen East Africa Fellow and 2014 Unreasonable Fellow.