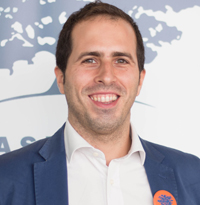 33- year-old, Alessandro was born and raised in the province of Milan. In 1999 he won a scholarship to attend the last year of high school at the United World Colleges in Canada. In 2001 he obtained a second scholarship at the University of Essex, where he graduated in Political Science in 2004 and was awarded Student of the Year.
In 2006 he completed a master’s degree at the London School of Economic and began working as a researcher in London for IFF Research.
In 2007 he started working for EdComs- public policy development and communication campaigns for the UK Government. In 2011 he returned in Italy as director of European Alternatives, NGOs active throughout Europe in the protection of human rights.
In 2011 Alessandro created Con-Way, 2.0 communication enterprise, and followed several electoral and communication campaigns.
Two years later he founded the project edu-care, branch of Con-Senso focused on education in the responsible use of social media for young people, parents and teachers. In 2014 he was selected as first director of Ashoka Italy. He lives in Rome, he is married to Julian.